UPDATE: The school sent a letter of apology to parents and called the Congressman to apologize.

Former congressman Tom Tancredo was invited to speak at the University of North Carolina- Chapel Hill. His topic? States failed economic policies regarding giving tuition money to illegal citizens. Of course, he could not speak because all of the race-baiting leftist barged the event, shouted him down and actually destroyed campus classroom windows in the process.

Why is it that when we (i.e. right wing extremists) protest, it is a peaceful gathering with people speaking what is on their mind, mixing it up with like-minded folks, sharing stories of what ails them or whatever the event happens to be about, but nearly every protest by left wing groups turn violent? Could these folks not have just sat outside and protested the event, but still allow the man to speak to the group who invited him?

I guess I just misunderstand the left. I thought they were all about the rights of people and stuff. You know, like the right to speak your mind, right of the little guy, etc. But then again, I guess that only applies to those who AGREE with their positions. If you are against their ideals, you are a racist hater who doesn’t deserve to be heard.

It can be spun any way the left wants, but the fact is that the government is BROKE. And if you want MY TAX DOLLARS, get in the pipeline and become an AMERICAN CITIZEN legally. If you dislike it, too damn bad. I don’t work to support law breakers, except those law breakers who are sitting their asses in jail.

Did you attend the Orlando, Florida Tea Party? If you did, then you know as well as I that the highlight was not the host Bud Hedinger, or internet radio blogette Andrea Shae King, any of the many fine speakers gathered, nor even Lloyd Marcus, creator of the theme song An American Tea Party.

No, what was most exciting was the Freedom Forum, where average, everyday people got the chance to stand up and make their voices heard. There were many passionate and patriotic speeches made (each one within the thirty second time limit) but in my opinion there was one that took the cake.

Nine year old Chelsi stood up there and proudly stated her case, “I’m an nine year old girl. I don’t have a job yet. So stop taking my money when I haven’t even earned it yet!” 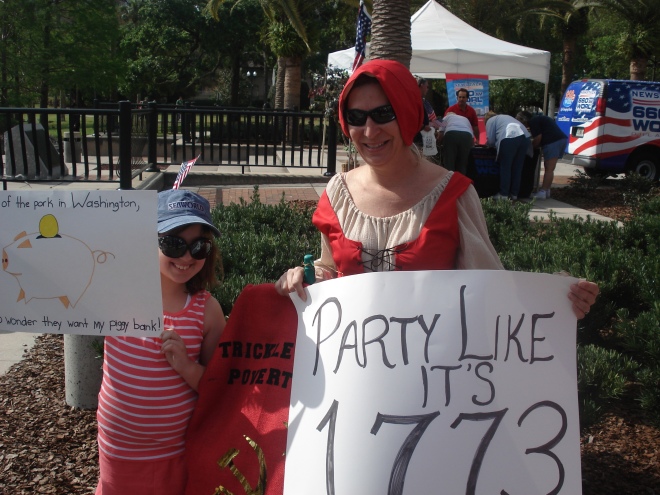 A raucous crowd of some 5,000 erupted into cheers at that simple statement and my own heart filled with pride. It was, after all, my own daughter who had made the comment. I could not have felt more pride in my child than I did right then (though I have to admit I am proud of all of my children in every thing they do).

The event was a massive success, I believe, and we were sad to have to leave about a half-hour before the closing ceremony. Even so, the comraderie I felt with all of those gathered was extremely moving and I had the sense that this was the beginning of the revolution I have so proudly tagged in the closing of all of my blog posts.

If you did not attend, never fear. There are many places to meet like-minded fellows and I am hopeful that these first seeds of dissent will spark many others to have similar, if a bit smaller, events. Every journey begins with a single step, and the Orlando Tea Party was one great step today.

UPDATE: As promised, the video of Chelsi telling it like it is:

If you are liberal, you know just what this headline means. It means, of course, that we must be tolerant of everyone. We must allow people to do and say what they feel, as long as they don’t do anything to harm others.

Well, ok, if they harm others they are just misunderstood, but you know what I mean. And, of course, if someone’s views are different than your liberal views, THAT person is not worthy of tolerance. Because, well, they are obviously self-loathing haters who do not deserve to live.

Keep your children from attending UMASS. They are all a bunch of idiots.

Our pulpits have thundered!

John Adams on the Black Regiment, the colonial preachers who had for years preached that the rights of men came from God.